It is with great sadness that we announce the passing of Cory Wells, a long time supporter of Niagara Boardgaming Weekend.  According to a family released statement, Cory passed away unexpectedly from an infection while fighting cancer on October 20, in Buffalo, NY.

When Michael Cardwell had the idea to set up a game convention in the Niagara area, Cory was a huge supporter and greatly encouraged Michael to get it going.  Except for when his touring schedule conflicted with the dates, Cory attended NBW from day one and was a very vocal supporter of the gathering.

On a personal note, Cory was a charming, generous and friendly person. We had many laughs together over dinner sharing gaming stories and the retelling of life experiences. Besides gaming, Cory was the founding member of 3 Dog Night and an avid fisherman. He greatly loved his family and is survived by his wife of 51 years, 2 daughters and 5 grandchildren.

Are you coming from the USA?

Don't forget your passport, you will need it at the border. Hotel is less than 10 minutes from the Niagara Falls, NY bridge crossing. 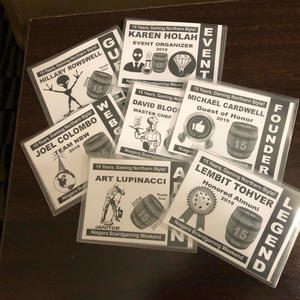